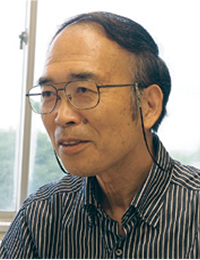 The calculation technique for “inverse problem,” known since many years ago in the fields of mathematics and physics, has recently begun to be applied in various ways to multidisciplinary fused research by mathematicians and researchers in other fields. We will make a challenge of exploring the inner structure of various objects with the use of this technique.

Fig. 1: A mathematical model of human body cross-section. Internal organs (blue) and tumor (red) are included in the model. Right: Estimation with the technique of inverse problem.

In mathematics and physics, forward problems and inverse problems are encountered. An example of forward problem is calculation of the intensity of the sound returning by reflection on several materials after being generated from a sound source. In this case, the information on the reflective sound is derived from the information on arrangement/distribution. A reversed procedure, i.e. estimation of the information on material arrangement/distribution from the information on reflective sound, is an inverse problem. This technique is now used extensively for fish finders and clinical checks of internal organs. Inverse problems generally involve a difficulty related to principle, because complicated information (information of higher dimensions) needs to be estimated from simple information (information of lower dimensions) such as “sound.” Mathematics attempts to overcome such difficulty by using the following techniques: (1) increasing the available simple information by means of combining the pieces of such information in a complicated manner, and (2) applying a special case (with specific analytical potential, etc.) known theoretically to have connection of low-dimensional information to high-dimensional information. A representative example of the latter case (2) is “inverse boundary value problem.” In a human body model shown in Fig. 1 (left), the way of electricity flow differs among organs or tumors, but the electric current within the living body can be estimated simply from investigation of the superficial electrical current of the living body, resulting in estimation of the location of internal organs or tumors (Fig. 1, right). A project to apply this technique to real human bodies is now under way jointly with Finnish researchers (Fig. 2).

Fig. 2: Electric current measurement on his own body surface by Prof. Samuli Siltanen (University of Helsinki)

Fig. 3: Structure of graphene (excerpts from the following paper)